HORSES grasp their food using a combination of the lips, tongue, and teeth. After chewing and mixing with saliva, it is swallowed into the esophagus where it travels to the stomach. The esophagus connects to the stomach at an oblique angle, preventing the ability to vomit. In an adult horse, the esophagus is around 4–5 feet in length with little reflux capability, and so proper maintenance of healthy teeth is critical to ensure that food is chewed correctly.

The stomach is a relatively small part of the entire digestive system (10%) and an average sized horse (1000 lbs) has a stomach with a capacity of 4–5 gallons. The primary function of the stomach is to add gastric acid and secrete enzymes to facilitate the breakdown of food, while regulating its passage into the small intestine.

The stomach constantly secretes acid as it is designed to work with a small and continuous flow of high fiber from the constant grazing on grass. A critical role of the acid produced by the stomach is to kill potentially harmful microorganisms in the feed, reducing the potential for infection. On an empty stomach however, the acid can penetrate the protective mucus layer and attack the cells beneath, causing ulcers to form.

Food may only remain in the stomach for around 15 minutes before being passed through to the small intestine. The stomach functions at its best when containing around 2 gallons because it empties when two thirds full — whether the enzymes have completed processing the food or not — and this may prevent complete digestion. A continuous supply of forage or several small feedings is therefore preferable to one or two large meals each day. 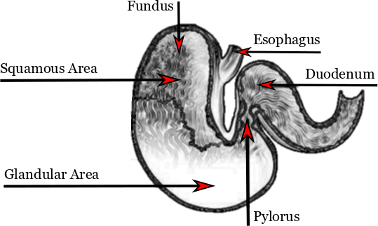 Equine Stomach: Food enters the stomach via the esophagus, leaves through the pylorus and passes into the first portion of the small intestine (duodenum.) The stomach contains both squamous and glandular regions.

The large intestine, or hindgut, comprises around two thirds of the digestive system and consists of the cecum, large and small colons, rectum, and anus. Ulcers also frequently occur in the hindgut and have been shown to affect more than half of performance horses. Hindgut ulcers frequently occur alongside gastric ulcers. In contrast with the foregut where digestion is primarily the result of enzymatic action, digestion in the hindgut is largely microbial, performed by billions of bacteria.

The first section of the large intestine is the cecum, which holds around 7–8 gallons wherein bacteria will spend around 7 hours breaking down the feed through fermentation. The cecum is a cul-de-sac pouch with both its entrance and exit at the top of the organ. The bacteria in the cecum are slow to adapt to the different chemical structure of new feedstuffs, taking about three weeks to develop a microbial population that can digest a new feed and maintain a normal flow. Because of this, compaction and colic may occur if a large amount of dry feed is consumed without sufficient liquid or if there is a sudden change in diet.

Microbial digestion continues to take place once feed passes from the cecum to the large colon (holding up to 20 gallons) where it may stay for 2–3 days before passing to the small colon. The small colon holds around 5 gallons and primarily acts to reclaim any excess moisture and return it to the body. This process produces fecal balls of undigested feed that are finally passed through the rectum (around 1 foot long) and expelled through the anus. 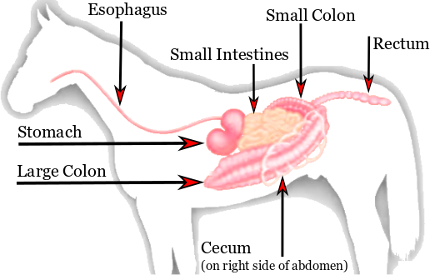 Studies have consistently shown that equine gastrointestinal ulcers are extremely common. However, while many studies have looked for breed, age, or gender specific associations, overall they suggest that environmental factors such as duration and intensity of exercise outweigh any such effects. Equine gastric and hindgut ulcers are a common cause of colic and decreased performance, resulting in a range of behavioral and physical changes. Jeremiah’s Ulcer Repulser™ treats, soothes, and protects the entire gastrointestinal tract.

48% of endurance horses during interseason, rising to 93% during the competition season (Tamzali et al., 2011).

72% of Thoroughbred racehorses with squamous ulcers and 25% with glandular ulcers (Sykes et al., 2018).

Some possible warning signs of equine gastric ulcers are: 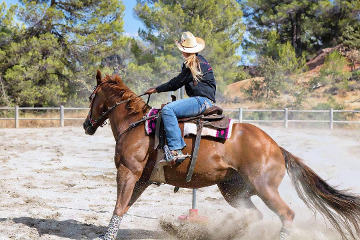 Show horses with a nervous disposition are more likely to have gastric ulcers than quiet or normally behaved horses (McClure et al., 1999). 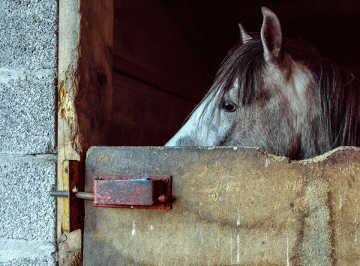 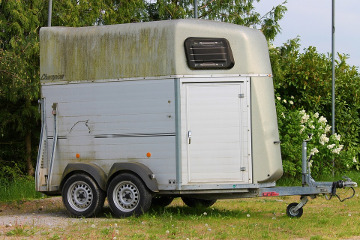 Playing the radio in the barn continuously for several hours increases the risk of ulceration, with talk radio increasing the risk by 3.6 times and music by 2.8 times (Lester et al., 2008).

Horses trained in urban areas are 3.9 times more likely to have gastric ulcers. A lack of direct contact with other horses and solid barriers instead of rails are also risk factors (Lester et al., 2008). 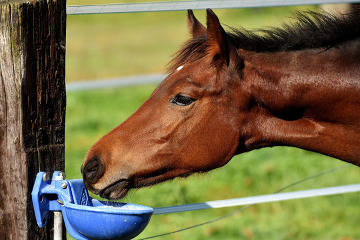 Horses without access to water in their paddock are more than 2.5 times more likely to develop gastric ulcers (Luthersson et al., 2009).

The use of NSAIDs (e.g., bute) have the potential to cause gastric ulcers, however this is usually related to the use of high dosages or frequent administration (Monreal et al., 2004; Reed et al., 2006). 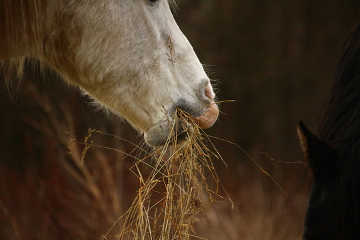 Feeding beet pulp as an additional source of fiber has been shown to decrease the risk of gastric ulcers (Pedersen et al., 2018).

Whereas feed deprivation, i.e., more than 6 hours without food increases the risk of ulcers (Murray & Grady, 2002).

Poor access to water increases the risk of equine gastric ulcers by 2.5 times.

Horses can develop gastric ulcers in as little as 8 days of intense training.

Confinement increases the risk of ulcers.

Stress of transportation may cause ulcers.

FDA required statement or disclaimer for non-drugs. These statements have not been evaluated by the Food and Drug Administration. These products are not intended to diagnose, treat, cure or prevent any disease.
© 2022 JUR Equine
All Rights Reserved